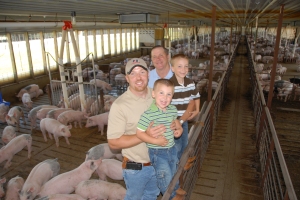 There’s a guy in Illinois who’s a farmer.  He farms 5,000 acres of corn and soybeans over several areas.  He is responsible for all of the business decisions for the operation, including which varieties to plant, when to sell what he harvests and for how much. His tractors and combines are huge machines. They are equipped with laptop computers and the latest GPS technology. As part of his income, he sells seed and cattle equipment to other farmers. He sits on the board of directors for a statewide farm organization, often traveling to meetings and conventions and providing input on the operation of County Farm Bureaus in his district. During busy times, he hires outside employees to help get the job done around the farm.

There’s another farmer, also from Illinois. A fifth-generation farmer, he takes environmental stewardship seriously, maintaining buffer strips next to water sources on his land. He uses contour planting and no-till farming. He and his kids drink water from the well on his farm.  He tends to his animals daily, taking special care when they’re sick. He’s up in the middle of the night – every night – during calving season to check on birthing cows and heifers and their newborns. Hundreds of school kids visit his farm each year for personal tours to understand how their food grows.  Three generations of his family work on the farm.

If you were forced to label one of these farmers as a “family farmer” and one as a “factory farmer,” which would be which?

Here’s the catch:  these two real-life farmers are brothers, in charge of different operations on the very same farm.

How can that be, when everything about the first farmer appears to describe a factory farm?  The answer is simple—the term ‘factory farm’ doesn’t mean anything. It’s a term used by activists to make people assume facts not in evidence. They know you’ll hear or read the term and assume it means something bad.  But do you know what they mean?  Do they mean a farm over a certain size?  If so, what is that size?  A hundred acres?  Five hundred?  Is it a farm that raises animals for meat, instead of just milk, eggs and companionship?  A farm that plants biotech crops?  Is it a farm that makes a certain amount of money?  Does it have to be all of the above—or just any one of the above?

If you Google “factory farm” you get about 260,000 results.  The first entry, from dictionary.com, defines a factory farm as “a farm in which animals are bred and fattened using modern industrial methods.”  Conjures up the image of robots forcing animals to mate on a conveyor belt while they’re being stuffed full of food, doesn’t it?

Wikipedia’s definition is this: “a systematic effort to produce the highest output at the lowest cost by relying on economies of scale, modern machinery, biotechnology and global trade.”  By this definition, a farmer trying to maximize efficiency to turn a profit – and using anything but horses and oxen to work the fields – is a factory farmer. As Russ Parsons of the Los Angeles Times wrote earlier this year, “farming without a financial motive is gardening.”

We are blessed in this country to have plenty of food and many options … conventionally-produced food, organic, locally grown. The truth is that no matter the size of the producer or the type of food produced, a profit must be made so that money can be re-invested and the farmer can provide for his or her family.  Yet, the organic farmer with 20 acres or 20 animals is celebrated, but the conventional farmer with 500 acres or 500 animals is vilified.

Activists would have you believe that because someone farms a large number of acres or raises a lot of animals, he does a bad job; he endangers the environment and mistreats his animals. Not true. Quality assurance programs, regulations and inspection programs keep farmers accountable. And when someone tells you that America is being over-run by “factory farms,” know that 94% of the farms in Illinois are family farms. Beware of labels. They can be misleading, vague and even meaningless.

The above post was drafted by the Illinois Farm Bureau originally for their blog, Standing Out in a Field.

One response to “A Tale of Two Farmers”

Working to unite urban and rural Nebraska by informing families about where their supply of healthy and nutritious food comes from, explaining agriculture innovations and showcasing rural life. Follow the Farm Meets Fork blog for the story of how family farmers bring your family food.